Before 2017, less focus was given to the taxation of foreign partners upon a disposition of a partnership interest as compared to during the operation of a partnership. In July 2017, to the surprise of many practitioners, the United States Tax Court issued the Grecian Magnesite decision, which held that contrary to prior IRS guidance foreign partners were largely not subject to tax on such a disposition, even if the partnership was engaged in a U.S. business. The congressional response was swift. In a manner of months and as part of the legislation commonly referred to as the Tax Cuts and Jobs Act, the Internal Revenue Code was amended to make clear that such dispositions did raise the potential for U.S. tax. The TCJA further enacted a new withholding regime applicable to transferees of such partnership interests as a collection mechanism, similar in structure to the FIRPTA regime. In the months that followed, the IRS has issued notices and proposed regulations, and in October/November 2020, final regulations on the statutory amendments. This topic will offer tax professionals an understanding of the contours of the administrative guidance that has been promulgated in this area to date. The manner of calculating the gain treated as effectively connected with a U.S. business, and amount realized base for withholding, will also be discussed. This topic will explore the exceptions from withholding and required information to satisfy relevant safe harbors and will also identify areas of remaining uncertainty and guidance that the IRS has noted is still forthcoming. 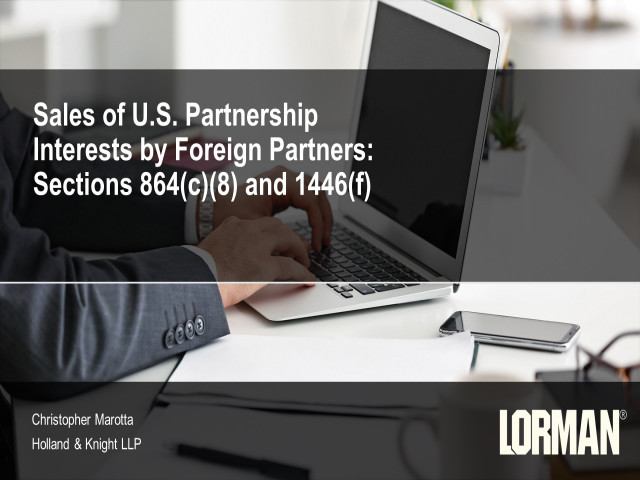