Explore the structure of sale-leasebacks and the more creative versions of such transactions.

Operators not wanting to retain capital in real property may look to sell the asset and lease it back from the purchaser at the closing in a so-called sale-leaseback transaction. Retail users, such as banks and restaurants, frequently utilize such transactions. We have also seen sale-leasebacks work for larger users planning a move from the property being sold, while retaining the flexibility to have time to do so and generating capital from the first property to move forward with the next property. These transactions include a set of issues that can be viewed as an overlay on the normal approach to each of a purchase and sale and a lease. Factors include (a) the economics of the transaction as, essentially, an investment transaction, (b) the allocation of risk between the operator-seller which developed the facility, and the purchaser-landlord which will own the property, and (c) the approach to the property upon expiration of the leaseback. Financial creativity has expanded the use of the sale-leaseback structure. There are firms which acquire land to lease to an operator, and sell the lease following completion and opening of the operator's facility. In other cases, a ground lessee, after developing its facility, may sell the ground leasehold interest with or without the improvements made, and lease back the improved property from the purchaser, creating a so-called sandwich position for the investor, with its own set of issues and opportunities.
We will explore the overall structure of sale-leasebacks and the considerations for each side to evaluate and address in a particular transaction, as well as looking at some of the elements that may affect the more creative versions of such transactions. 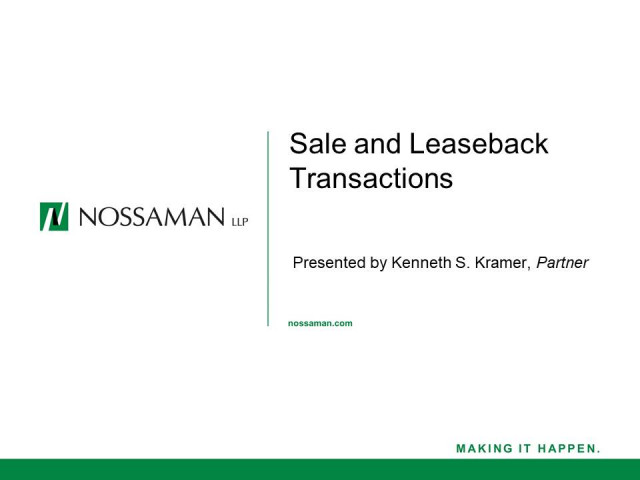