Avoid problems due to multiple prime contracts and learn to reduce the risk of contractor claims for hindrance, disruption, delay, and interference.

Construction contract delivery processes establish the method under which the design and contract documents are developed; the manner in which the contract sum will be established; and the contractual relationships between the parties retained to perform the work. Under the traditional design-bid-build contract delivery method, a designer is first retained (or employed in-house) to fully develop the design and contract documents, before bids are solicited from the contracting parties. The solicitation may involve only firms proposing to serve as construction manager, general contractor or construction manager/general contractor. In this situation the successful bidder will be responsible for retaining the services of trade contractors for each discipline of work. Specific states, however, permit or require that public agencies engage certain trades separately under a contract delivery method defined as Multi-Prime Contracting. Multiple-Prime Contracting involves the retention of individual firms under separate contracts to perform work by construction discipline. The construction disciplines most often include structural, mechanical, electrical and plumbing, but may include other specialty trades. A general contractor is also retained and tasked with performing general conditions type works and retaining other trades to perform exterior and interior finish work no included within the other prime contracts. While often limited to public agency work, private owners are permitted to employ Multi-Prime Contracting, particularly in situations where the private owner has an existing relationship(s) with other trades. As with all contract delivery methods, the successful outcome of the project will be dependent upon the ability of the parties to work in unison toward completing the project on-time and within budget parameters established under each contract. This topic provides information on the differences between the traditional design-bid-build contracting delivery system that employs a construction manager and/or general contractor, and that employing Multiple-Prime Contracting. These differences require that each prime contractor understand their modified roles in the construction process and develop a framework by which impacts to the work of others are minimized. This material will review how to employ project controls and dispute avoidance processes to minimize the obstacles and issues that often result in projects experiencing cost overruns and extended time of performance. 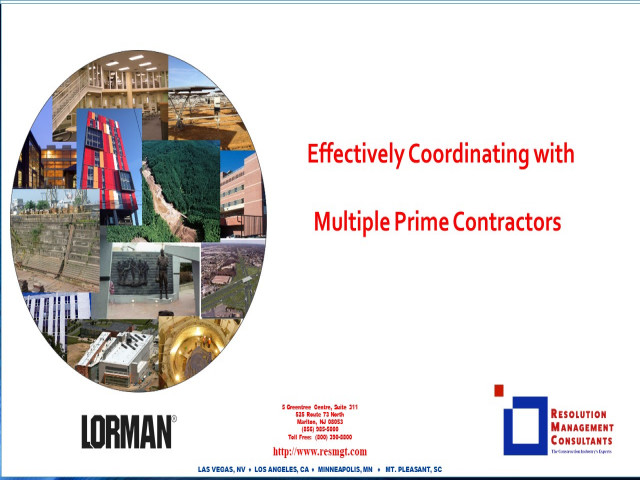