Understand the evolution of the Clean Water Act, its success, and how it has evolved to expand coverage over wet weather and emerging contaminants.

The 1972 amendment to the Clean Water Act defined navigable waters as waters of the United States (commonly referred to as WOTUS) and subject to federal Clean Water Act jurisdiction, but left the definition of what falls under WOTUS under the discretion of the EPA and U.S. Army Corps of Engineers. Since then, the Agencies have struggled to address waters that were not clearly in or out of their WOTUS definitions. Litigation followed, with several landmark Supreme Court cases in which the Court has interpreted definitions for WOTUS and the Agencies' jurisdictional authority. Both the Obama and Trump Administrations have also attempted to resolve and clarify federal authority through competing rulemakings that resulted in more litigation. Today, many federal and state regulators, let alone regulated parties, are still confused regarding jurisdictional reach. In this material, Barnes & Thornburg attorneys will trace the key developments associated with defining federal jurisdiction under the Clean Water Act, explain the current definition, and assess immediate prospects for the new Administration. The presenters will also discuss other new developments affecting federal jurisdiction, including the Supreme Court's Maui decision impacting regulation of discharges to groundwater, and explain federal vs. state responsibilities and concepts of federalism. 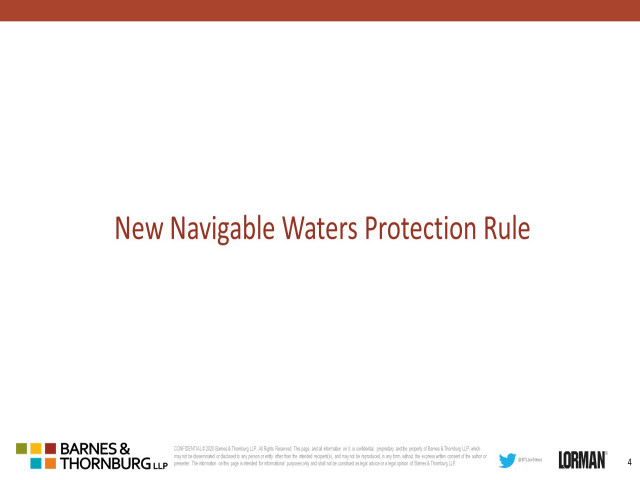