Explore what is covered by UPMIFA and many common misunderstandings about its scope and limitations.

The Uniform Prudent Management of Institutional Funds Act (UPMIFA) was released for State enactment in 2006, following five years of study and drafting by the Uniform Law Commission. Within three years, it had been adopted by a majority of all states, and within five years, it had been adopted by 50 states, the District of Columbia, and the U.S. Virgin Islands leaving only two jurisdictions in the country where it is not the law governing the investment and expenditure.
Almost 20% of the labor force in the United States is directly affected or employed by charitable organizations, and since the Act governs the use, management, and expenditure of trillions of dollars, its importance and impact on our daily life cannot be overstated. This UPMIFA Update Program will review the origin and rationale of UPMIFA and explain its continued importance and popularity as the primary source of law governing this vital portion of the United States Economy.
This course will explore what is covered by UPMIFA and many common misunderstandings about its scope and limitations. We will also review some of the developments in the law since its 2006 creation, including variations in some state versions of the Act, several important appellate court interpretations of UPMIFA, and the ongoing legislative pressure to make further changes in this vital statute. 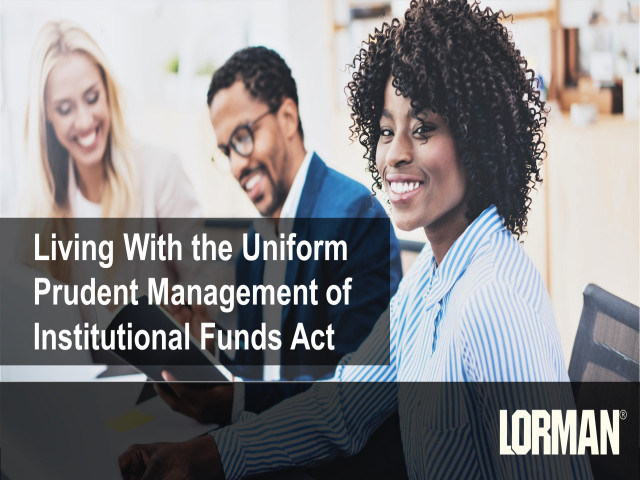 Living With the Uniform Prudent Management of Institutional Funds Act