Learn about all the new updates in the Fair Labor Standards Act.

Most employers in the United States must comply with the minimum wage and overtime requirements of the Fair Labor Standards Act (FLSA). The FLSA contains numerous exemptions from those requirements, and the exemptions most frequently invoked, and which result in the most litigation, are the white- collar exemptions for executive, administrative, and professional employees. One requirement of the white-collar exemptions is the "salary level" test, which requires the employee receive a salary of a specified minimum amount. The minimum salary level was last established in 2004. In 2016 the United States Department of Labor (DOL), which enforces the FLSA, issued regulations which, among other things, greatly increased the minimum salary, but those regulations were struck down in court. On September 27, 2019, the DOL issued new regulations which, effective January 1, 2020, again increase the salary level above the levels established in 2004 but less than the levels established in 2016, and make certain other changes to the white-collar exemption rules. It is imperative that employers comply with the new regulations, since failing to do so can result in misclassification of employees as exempt, leading to substantial legal liability. This topic will help employers and human resource professionals understand and apply these important new regulations. 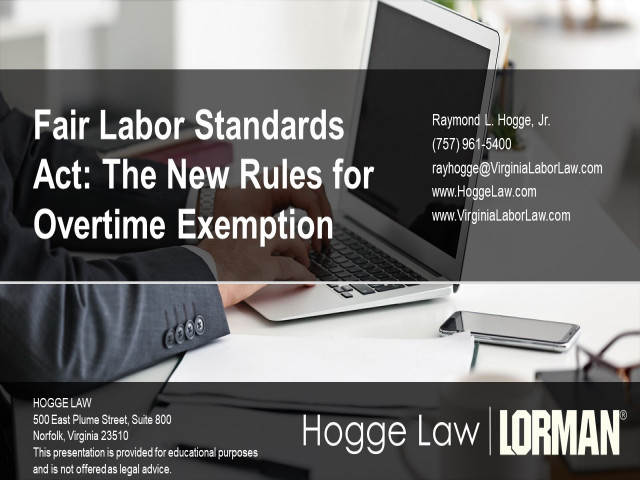