Gain an understanding of the two families of contract forms and the latest changes to ConsensusDocs.

Gain an understanding of the two families of contract forms and the latest changes to ConsensusDocs. Hardly a business day goes by in the construction industry when the parties involved in the construction contracting process do not encounter standard form contract documents. Since 2007, there are now at least two principal sources of such standard form construction contract documents that dominate the marketplace with the 2007 and later editions of their respective families of contract forms. In 2007 and after, the long-established family of documents published by the American Institute of Architects were substantially revised. In comparison, the relatively new and evolving family, the ConsensusDocs, represents an effort by a broad industry coalition of construction industry interests (owner, contractor, subcontractor, and insurance and surety interests) to develop by a consensus process and comprehensive set of standard forms. These standard forms can and likely will be encountered more frequently in the construction contracting process, either in relatively clean or in substantially modified forms. Even where the forms themselves are not conspicuously used, many of their concepts and even their explicit language will show up in a variety of proprietary construction contracting forms and practices. Thus, as the battle of the contract forms continues and the construction industry engages in the ongoing debate as to the relative merits of these two families of documents, this topic will assist you in your understanding and application of the two families of documents, where they are similar and where they are different, sometimes materially so. It will highlight areas of concern and of potential modification of the various contract forms as well as aid in the selection of appropriate standard form contract documents. 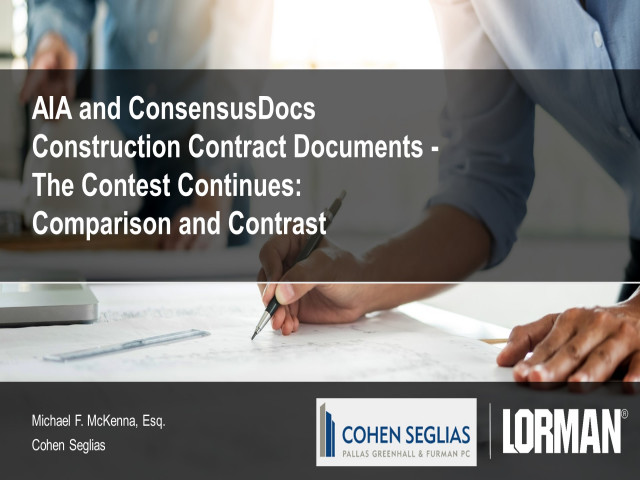