Learn the risks and costs associated with nexus noncompliance.

A threshold issue for any corporation operating in more than one state is determining the states in which it must file returns and pay taxes. A state has jurisdiction to tax a corporation organized in another state only if the out-of-state corporation's contacts with the state are sufficient to create nexus.
In National Bellas Hess, Inc. v. Department of Revenue [386 U.S. 753 (1967)], the Supreme Court established the principle that an in-state physical presence is an essential prerequisite to constitutional nexus, at least for sales tax purpose. In Quill Corp. v. North Dakota [504 U.S. 298 (1992)], the Supreme Court reaffirmed the physical presence requirement. In the years following the Supreme Court's decision in Quill, the precise meaning of constitutional nexus in the income tax arena remained a grey area of the law, and numerous states enacted statutes establishing an economic nexus standard for income taxes.
Given the dramatic growth of e-commerce during the decades since the Supreme Court's 1992 decision in Quill, it was only a matter of time before the physical presence test for substantial nexus succumbed to the realities of the modern marketplace. In South Dakota v. Wayfair, Inc. [585 U.S. (2018)], the Supreme Court overturned its precedent in Quill and ruled that a state can require an out-of-state seller to collect sales taxes on sales to in-state customers even if that seller does not have a physical presence in the state. The Supreme Court's repudiation in Wayfair of the prior physical presence standard opens the door for the states to more aggressively use the concept of economic nexus to tax the income of out-of-state corporations. 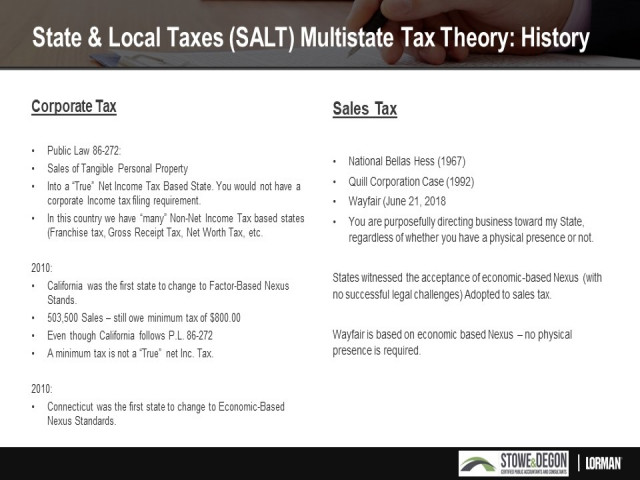